Beaver Dick is a park 4.5 miles west of Rexburg, Idaho on Hwy 33. It's a 9.5 acre park that passes next to the west bank of the Henry Fork of the Snake River; it's a popular...

Share
Flag as NOT Free
5.7 miles W of Rexburg, Idaho

Beaver Dick is a park 4.5 miles west of Rexburg, Idaho on Hwy 33. It's a 9.5 acre park that passes next to the west bank of the Henry Fork of the Snake River; it's a popular place for swimming, fishing and other water activities such as boating and canoeing.

Within the campgrounds, there are fire pits, pavilions for social events and gatherings, bathrooms and a playground for the kids. It almost makes for good rounds of walks around the outskirts of the Snake River while enjoying the scenery.

The park was named after an English-American named Richard Leigh. He was reportedly given the moniker "Beaver Dick" by LDS president Brigham Young for his beaver trapping abilities. As a young boy, he left England and moved to the United States to make a living as a fur trapper and eventually, fought in the Mexican war at 17 years old. He traveled throughout the Teton laying traps for beavers for fur, hunting and mapping out the Fire-Hole [Yellowstone Park], Jackson Hole and west of the Tetons in his journal. He became a fluent speaker of the Bannock and Shoshone language, met and married a native American woman named Jenny and had 6 children. The family adopted a child that contracted smallpox; the family of the child died. The family, including the adopted child, died of smallpox and Beaver Dick survived. He later remarried to a Bannock Indian named Susan Tadpole in 1979 and had 3 children. He lived the rest of his life as a mountain man but in 1899, he passed away of a serious illness and was buried beside his family overlooking his ranch in Rexburg, Idaho. He will be remembered as a skilled hunter, trapper and an expert in exploration and settlement of the Tetons, guiding travelers and explorers throughout the mountain west.

-Bring water; there are no water fountains

For reservations, information, questions or concerns:

The use of this field for playing paintball is now prohibited. Please take better care of the fields we are permitted to use.

Beaver Dick Park: The legend behind the name - Explore Rexburg

2. The park is on the left just after the river.

3. Parking is immediate when you turn in.

5/7/20 1:37 pm
A small park but a very good place if you want to get away from the craziness of life within a short distance
Reply

1/17/19 8:30 am
Had an enjoyable campfire experience. This Park is well set up for group activities.
Reply

9/10/16 1:19 pm
Beaver Dick is a cute little campground! My kids had a blast playing on the old school playground. The covered pavilion was perfect for our picnic. We used the provided charcoal grill, but there was also a nice fireplace. It's right on the river, with beautiful scenery and bushes and fun wild life. We set up 2 slack lines. There was enough parking for all 6 of our vehicles. It was nice that it was close enough to run into town to get Ketchup and things that we forgot. I recommend this place for locals and for visitors. It's a refreshing little oasis in the middle of the desert. But do bring bugspray. Mosquitoes are always a pest near water.
Reply 1
Edit Review Delete Review
Reply Cancel Other Swimming Holes, Canoeing Areas, and Folf Courses Nearby 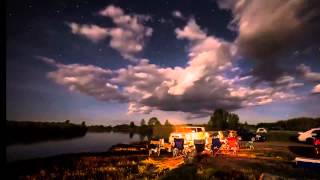 This is a pretty popular campsite that fills up pretty quick on busy weekends. Campsites are fairly spread out and there is no official donation box (as of July 2015). A couple of the campsites... Rexburg Nature Park: Life can be stressful, annoying, or just not good. Sometimes, it takes a moment to simply get away from the non-sense of this world; to gather yourself and seek peace and...

Rigby Lake has long been a favorite swimming hole for those in the area. The county has taken it well under its wing and made it a buzzing spot on any warm summer day. Along with the long standing... Egin Lakes is one of the favorite gateways to the St. Anthony Sand Dunes. The lakes themselves are unusually shallow and where you'll actually find a lake depends greatly on what time of the...

Twin Bridges is a campground 12 miles South East of Rexburg on S. 600 E. It is maintained by Madison County Parks Department. It is a 27 acre park of pristine land rich with wildlife on the Snake... CLOSED. PSA: Monkey Rock is no longer open to the public. The owner has posted "No Trespassing" signs and is asking the Fremont County Sheriff's Office to assist with keeping people out of their... 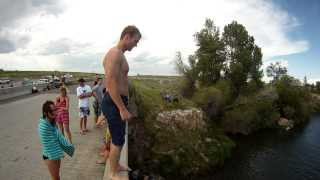 Less than 1/2 a mile down the road from the Monkey Rock waterfall, Hog Hollow Bridge is a favorite spot for adrenaline junkies to cool off. The place to jump is off the East side of the bridge where... Also known as the Funny Farm Bridge, this is an excellent place for bridge jumping. You can jump from the road level, the top of the bridge, or swing from the bars below. Just be watchful of cars...